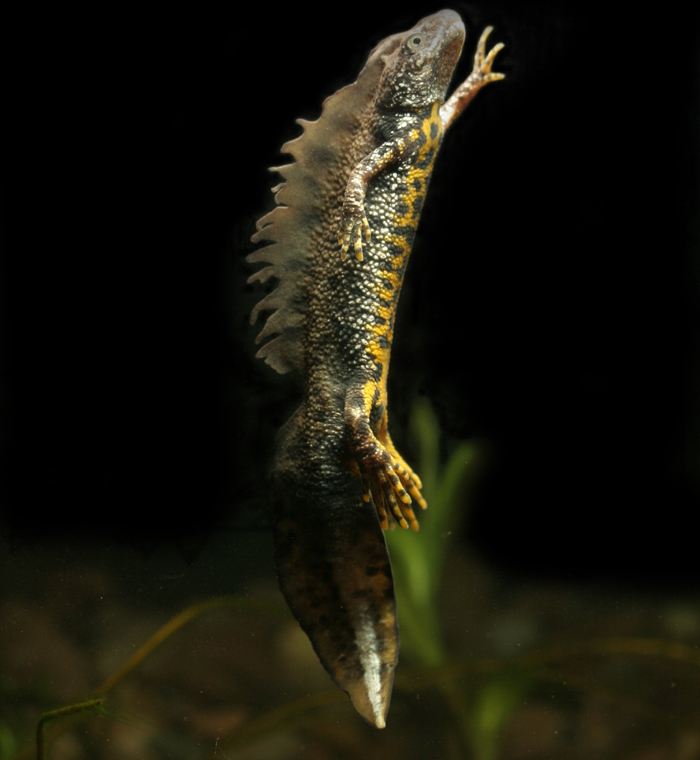 The GCN is the only large newt, about 15cm long, native to Britain. Viewed from above it usually looks black and has a warty skin.

Field ponds can be good breeding places and woodland, scrub and rough grassland are used for foraging and hibernation.

Of Britainâs five âwidespreadâ amphibians the GCN's decline appears to be the most rapid, so it is the only one fully protected by the law (the localised Natterjack toad is also fully protected).

It is a lowland species being rare or absent on the harder rock landscapes and higher ground of the West Country, Wales and further north.

An estimated population of 1000 GCNs is considered exceptional. However Britainâs largest known population is estimated as 30,000 GCNs. It was discovered on a derelict clay extraction site during the planning process for a major development in Peterborough in 1990. Now part of the site has been designated as a Site of Special Scientific Interest and Special Area for Conservation on account of the GCN population and rare stoneworts â Hampton Nature Reserve. The last âBig Countâ in 2006 shows the newts are still there, estimated population 29,440.

The Great crested newt is a long-lived amphibian, with specimens known to have reached the age of 15 years, although 6 years may be more realistic for wild animals.

The male Great crested newt sports a magnificent crest during the mating season, unlike the female.

Tailed amphibians are distinguished from lizards by their skin texture: reptiles have scaly dry skins and amphibians damp and âsmoothâ skins. The two native small newts are 10cm in length or less and olive coloured. GCN are a grey brown colour with black spots; along the flanks they have fine white speckles; and they have thin bands of yellow across their long toes. Bellies are a rich uniform yellow with a pattern of black blobs that is unique to each individual.

The rich yellow of their bellies extends along the lower edge of the tail of juveniles and this is retained by adult females. In adult males the tail underside is dark. During the aquatic breeding phase males have a distinctive silvery white strip along each side of the tail. The impressive jagged crest also develops and extends from the head to the tail tip, but is deeply notched where the tail is attached to the body. Out of the water the crest flops over the body and appears as little more than a ridge along the back.

Breeding male smooth newts, Triturus vulgaris, also have an impressive crest that extends from the head to the end of the tail. However it has a wavy not jagged outline and is not notched. Also smooth newts are only 10cm long. The general form of the GCN is also much heavier than the small newts.

The male has a crest and a broad white flash along the middle of the tail.

The female has no crest with an orange stripe along the bottom of the tail and a thin orange line along the centre of the back. 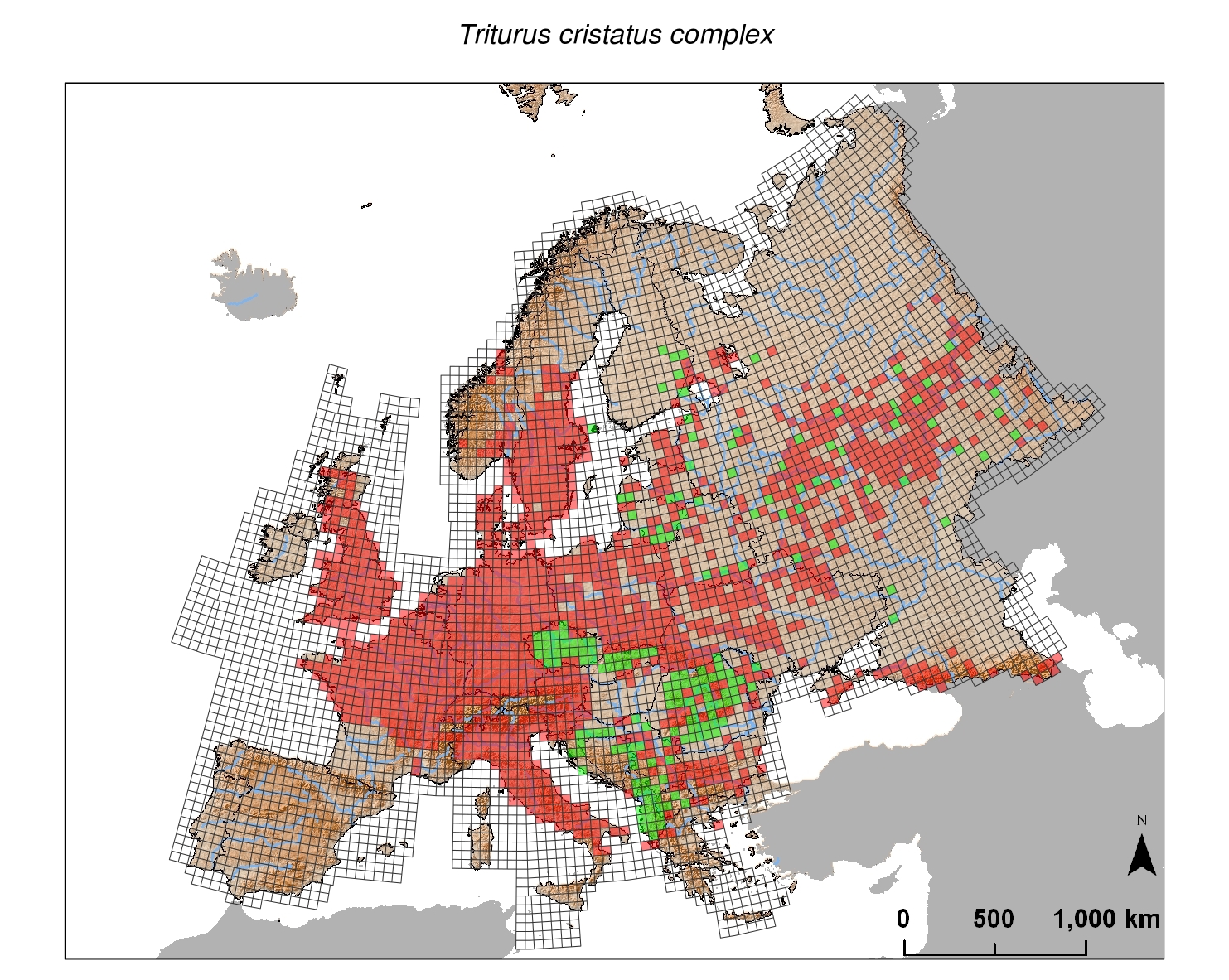 The GCN is found in a central band across Europe from Britain to the Urals and from the Alps to southern Scandinavia.

Britain is the northwest limit of this species. It is found in England, Wales and Scotland but not Ireland.

Known GCN sites in Surrey are scattered across the county, though are more concentrated in rural areas of the Wealdon Clay and where pond density is high. 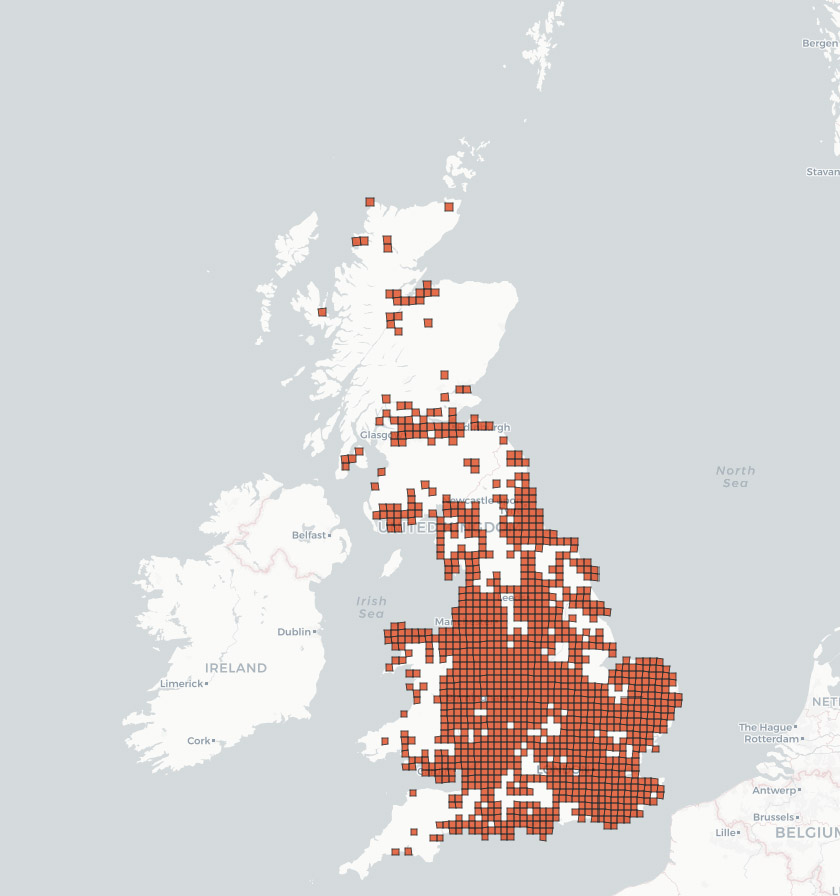 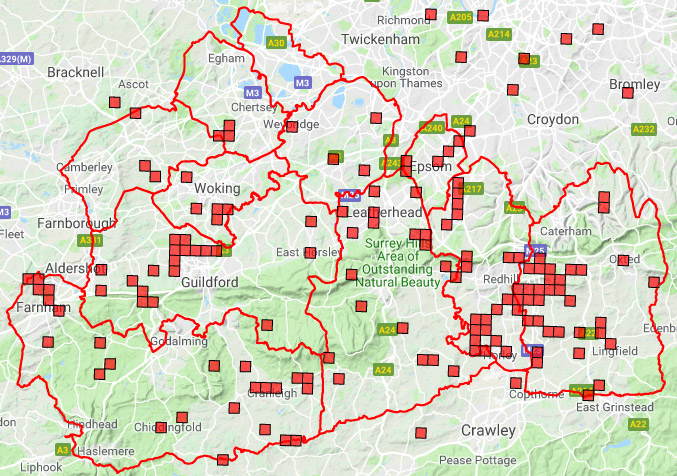 These amphibians need ponds for breeding and terrestrial habitat for foraging and hibernation, although they do forage in and can over-winter in ponds. Ponds are usually small to medium size, 25 to 100m2, free of fish and in a rural setting; often with further suitable ponds within 500m. 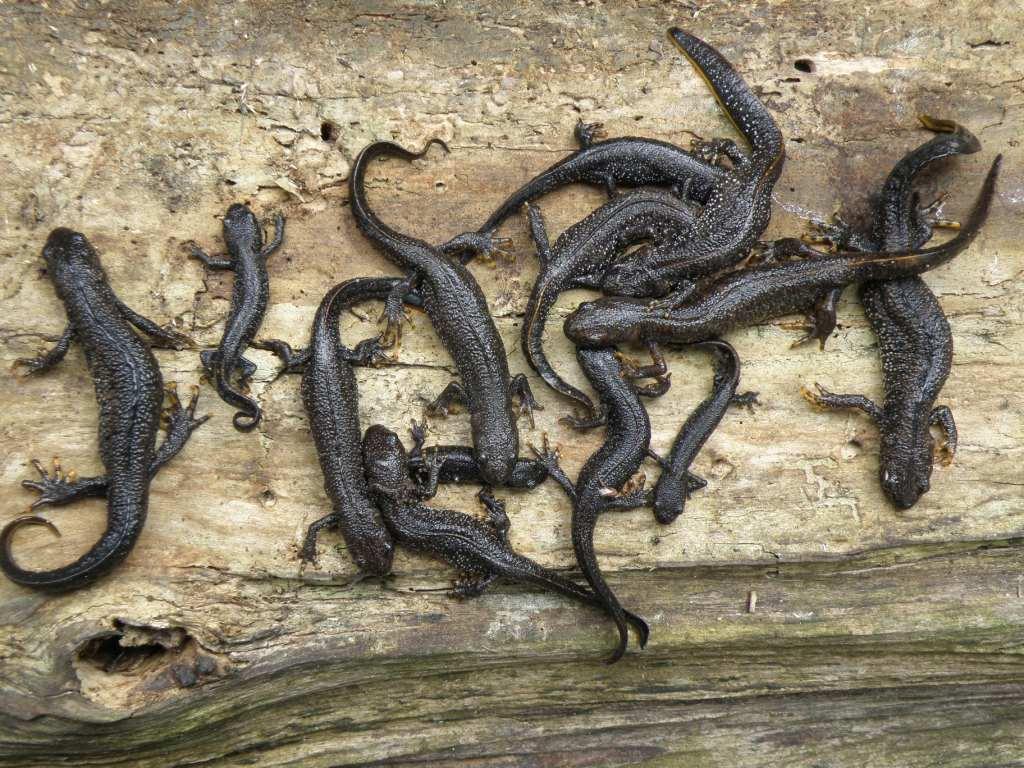 GCN can hibernate communally when a good shelter is found 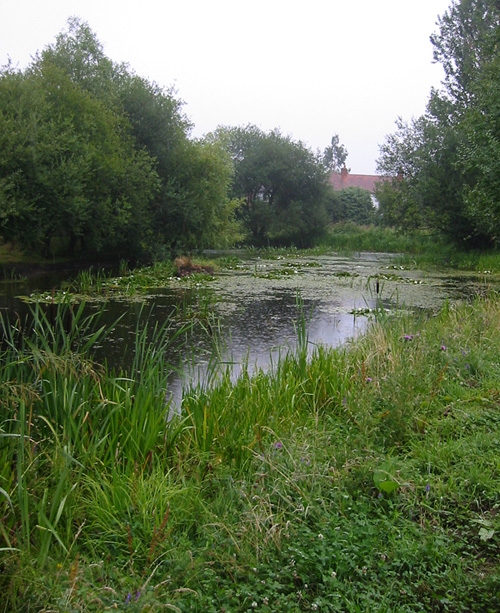 A typical GCN pond: usually a cluster near woodland. 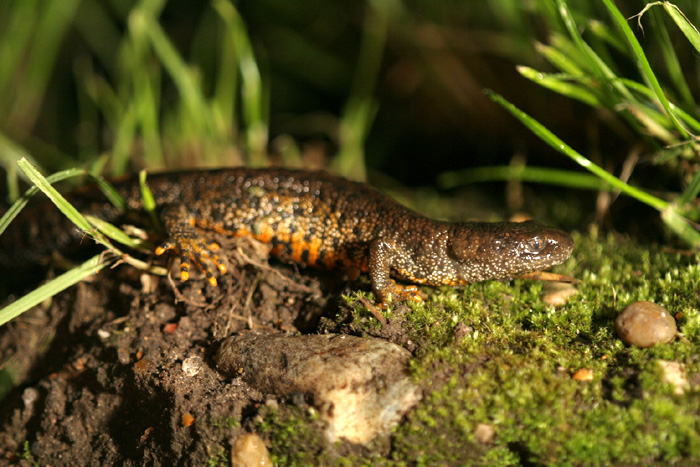 For much of the year, GCN live and feed on land.

The GCN is nocturnal in both its aquatic and terrestrial habitats, although it can occasionally be seen in ponds in daylight, rising to gulp air from the surface.

GCNs return to their breeding ponds from their hibernation sites in later winter. The best time for surveying is during the breeding season, the courtship (mating) period, as GCN are more conspicuous then. However in July look for larvae basking in open water.

This extends over eight weeks and is dependant on the weather and pond location: typically mid-March to mid-May.

Breeding adults start to return to breeding ponds as the winter night-time air temperatures rises to 5Â°C and above. They leave the pond over an extended period; between May and September. 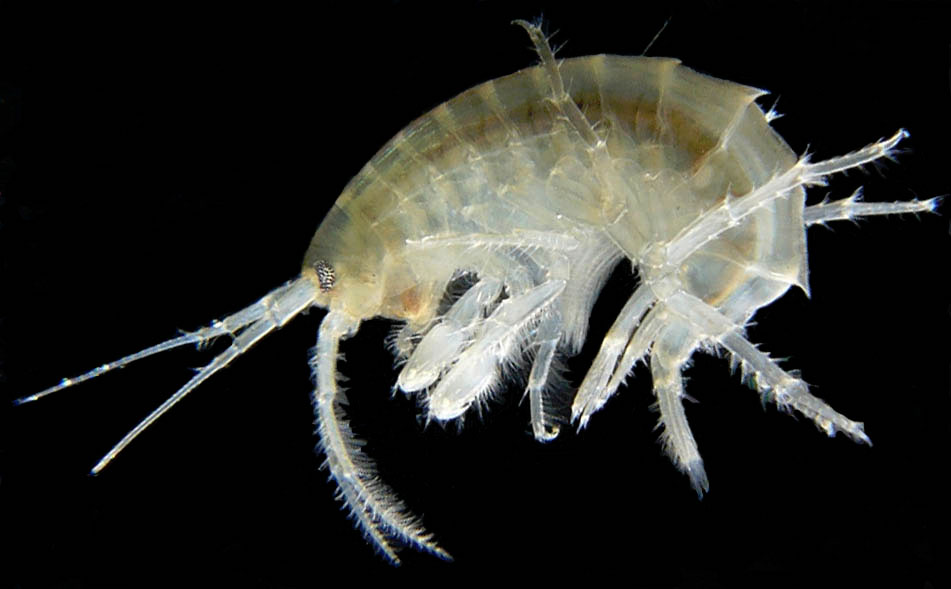 Invertebrates such as the Freshwater shrimp are prime prey for the Great crested newt. (Actual length ~10mm.)

In a pond anything from water fleas to small snails and beetles and amphibian larvae, even the occasional adult smooth newt is taken. On land, small creepy crawlies, slugs and earthworms are eaten.

As an ectotherm (cold blooded species) expect it to require only one tenth of the quantity of food that a warm blooded animal of similar size would require.

In water, newts spot prey visually or detect electrical or water currents generated by prey items. They draw water in to their throat to sniff the prey before committing themselves to snapping it up. On land they are very short sighted so reliant on prey passing very close by. Small items are caught with a sticky tongue. Larger items are snapped up and maybe subdued by shaking before they are gulped down. 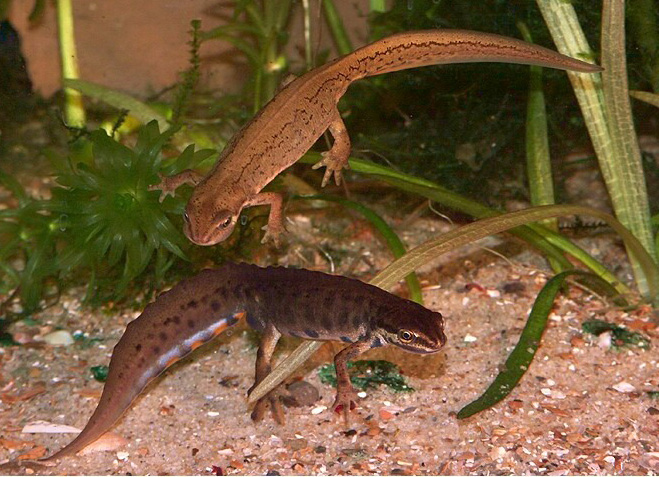 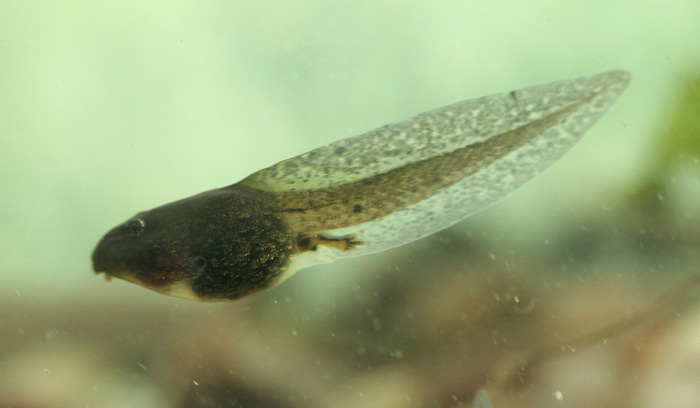 Tadpoles are a favourite prey item - both frog and toad tadpoles are eaten. 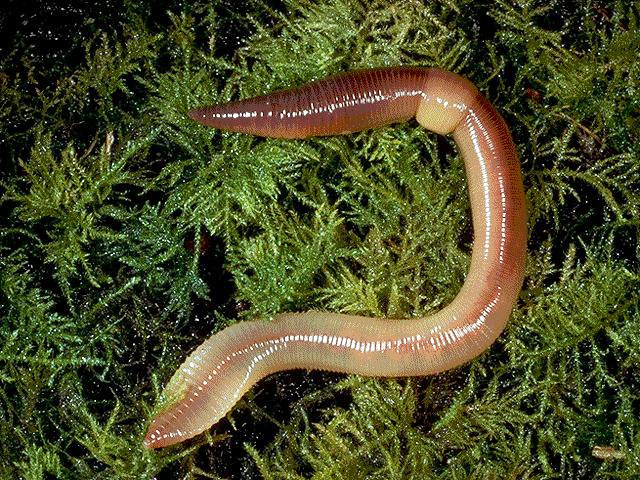 Earthworms are eaten in both aquatic and terrestrial phases - when available. 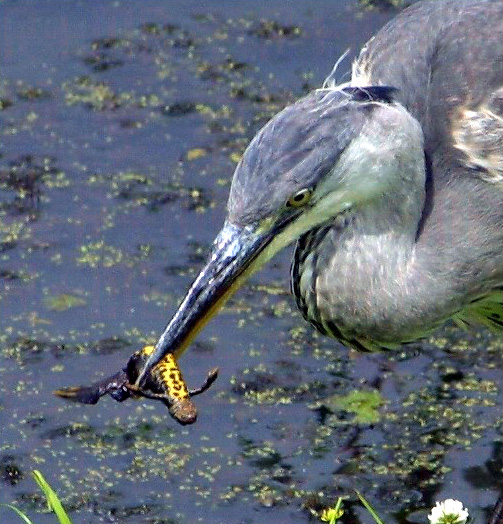 Adult GCN are predated by reptiles, birds, fish and mammals.

Their only usual reptilian predator in Britain is the grass snake (Natrix natrix), although in mainland Europe other water snakes, such as the Dice snake (Natrix tessellata), and European pond terrapin (Emys orbicularis) also prey upon these newts.

Mallards seek them out, but capture by moorhens appears more incidental. Herons, bitterns and egrets are the main avian predators, although kingfishers occasionally are seen to take them.

A wide range of predatory fish consume the conspicuous larvae that have the diurnal habit of ârestingâ in weed free water, but adults may also be taken.

Juvenile GCN are additionally vulnerable to predatory insects, such as diving beetles and dragonfly larvae.

Post metamorphosis animals are distasteful as they have skin toxins, an adaptation the larvae do not have. Being nocturnal also makes them less vulnerable to predation.

In nature bright colours of prey items indicate âdistastefulâ to predators (aposematic coloration). If molested on land the GCN will bend its body to expose its rich yellow belly and tightly coil its tail.

The Great crested newt has no direct competitor in Britain, as it is the only large native newt. If the introduced Italian crested newt (Triturus carnifllex) gains a significant foothold, this uniqueness could well change. 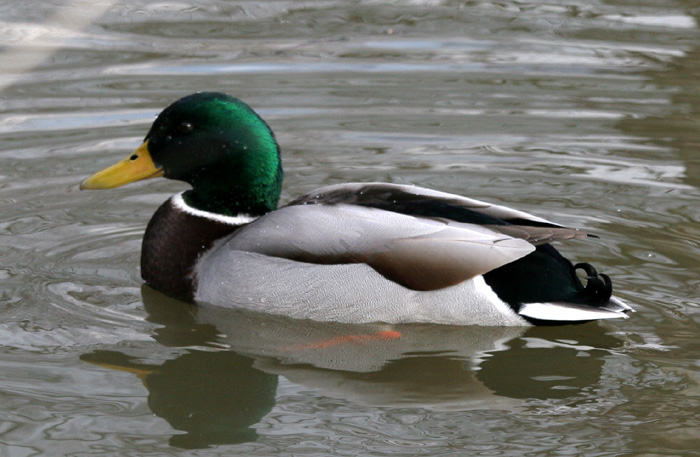 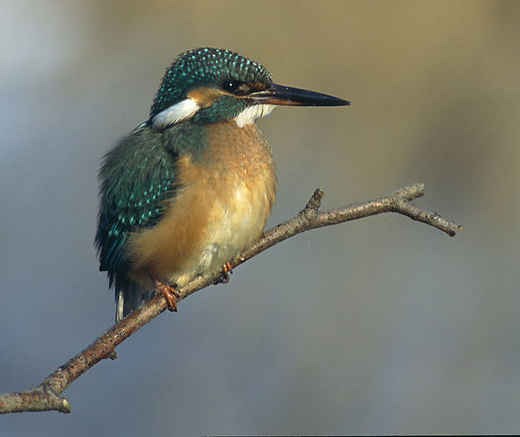 For hibernation sites, they need damp places that are frost and flood free, such as a deciduous woodland floor covered with fallen branches, leaf litter and under-story plants. Artificial hibernacula can be created by constructing mounds using logs, bricks and rubble and topsoil or turves.

In ponds they tend to seek refuge and forage in the deeper regions of the pond among plants. On land they have been radio-tracked to mammal burrows and spaces among tree root systems. They will hide in crevices and rubble near buildings.

On returning to the aquatic environment the development of the breeding dress of males is completed; the crest and tail stripe. At dusk males seek out display areas on the pond floor. When another newt enters his area he commences his courtship dance. This wafts pheromones towards the snout of the second newt. The dance is quickly terminated when the second newt is identified as a male or disinterested female.

Courtship extends over several minutes until the female appears receptive. The male then deposits a sperm package onto the pond floor and bars the way so the female passes over it and picks it up in her vent. There is no physical contact between the sexes. Frequently mating does not occur as other newts disturb the courtship dance.

Eggs are laid individually and enclosed in a folded leaf. They can be quite conspicuous as the GCN often uses leaves near the water surface. Here in warmer water embryo development will be faster. Being enclosed gives the eggs some protection from predators and harmful UV radiation from the sun. The 6mm diameter eggs with white/light yellow centres are easily distinguished from the smaller grey/brown eggs of the smooth and palmate newts.

Over a number of weeks a female lays around 200 eggs, but due to an inherent genetic defect; only 50% will hatch.

One estimate suggests 2% of eggs may reach metamorphosis.

GCN tadpoles hatch from their eggs around May to June. They take at least three-months to develop and to metamorphose into efts (young newts) in the autumn; although it is not uncommon for some tadpoles to remain aquatic over the winter months.

GCN larva frequently demonstrate the strange habit of floating just below the pond surface in the open, away from any vegetative cover. At first sight they sometimes appear to be dead, but will suddenly swim back down into the depths. It is not understood why the larvae take such apparent risk, but perhaps it is to avoid canabalistic predation from adult newts.

Prior to metamorphosis, GCN tadpoles can reach the impressive length of 8cm (3 inches).

As with most amphibian larvae, the GCN tadpoles will eat a variety food, such as algae and water fleas (daphnia).

Concern for the declining status of the GCN in Britain is recognised by government as indicated by its inclusion in the first tranche of Species Action Plans listed in Biodiversity: The UK Steering Group Report published by the Department of the Environment in 1995.

Extensive deterioration of suitable habitats has occurred since the 1940s through agricultural intensification and loss of field ponds. Fragmentation of the countryside through loss of hedge rows, by urban and industrial development and transport networks has isolated populations. The new agri-environment schemes encourage projects to benefit the GCN; the creation of ponds and linking wildlife corridors, but will these schemes continue?